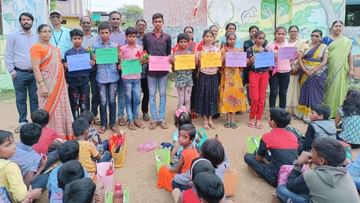 EVMs were used in this tribal area!

Gadchiroli: Use of EVMs in School Cabinet Elections Are you all surprised? Yes, it is very true. This innovative experiment was implemented to educate school students about the election process. School ministerial elections were held today in GP Central School Chamorshi under Chamorshi Panchayat Samiti. In this activity, students participated in the voting process using the Android app ‘Voting Machine’.

What is election? How do adults vote? How is EVM machine? How are votes counted? Why do you apply ink? And how is the overall process? Many such questions are constantly asked by the students to the teachers of the school.

School’s technical savvy teacher Praveen Potwar informed his fellow teachers about the decision of actually implementing the election process through EVMs to the school students. This process was implemented with the cooperation of all the teachers.

Prepared EVM through Voting Machine App and prepared list of candidates with photo in it. Projectors with mock polls showed how the class actually votes.

After pressing the ballot button, a green light flashes and a distinctive sound is heard when the button next to the preferred candidate is pressed. After conveying this to everyone from the projector, the actual election process began.

A separate polling station was set up in the classroom. The voter list was announced before the polling. A total of 9 EVM machines were kept for 9 posts.

100 students of the school participated in the voting. Two students were chased near the door by forming a long queue outside the polling station. asked to control the crowd. School teacher Mangalkumar Manampallivar served as the presiding officer of the polling station.

The students participated with great enthusiasm in this process. Each voter was voting for nine seats. No bogus voting or over-voting took place. After voting, the EVM machine was sealed by pressing the close button at around 9 o’clock.

Soon after that all the students were called in the fray and the results of the election were declared in front of the candidate.

After the selection all the students celebrated by lighting Gulal. The oath of office and secrecy was administered to all the ministers in the school cabinet elected by the school teacher Tushar Chandekar.